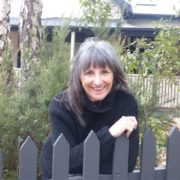 IT TOOK a brush with a life- threatening illness to convince India Wallace to change her journey in life.

Now with insight from the experience, the Forest Range resident uses her compassion and understanding to help others who find themselves in the same position.

In 2003 at the age of 42, the single mother was diagnosed with an aggressive breast cancer and feared for the future of herself and her 14-year- old daughter Ruby.

Prior to diagnosis, she was working in a fast-paced media career with long hours, stress and an unhealthy diet and was pushing her body to the limits.

When diagnosed with cancer, she was shocked and scared, but her strong spirit ignited a determination to cure herself by any means she could.
“This was the worst day of my life, but I knew I had to survive as my daughter was still in my care,” she said.
The approach to heal herself was simple – she changed just about everything in her daily life.
After procedures of a lumpectomy, chemotherapy and radiation, she decided to take a holistic approach to her treatment.
Starting with diet, she reduced her workload and began daily meditation and sought out a professional healer to heal her emotional state. “This changed my life in a way I had never imagined,” she said. “It made me open up and address some old wounds and helped me accept myself and what was happening in my life.
“I studied Buddhism and began practicing its teachings – something that has continually given me great meaning in my life.
“Living a holistic life has given me the faith to let go of expectations and help me live each day in the present moment.
“I was able to overcome my fear and move forward.”

Ms Wallace gained valuable experience by training with the Gawler Foundation which led her to volunteering at Buddha House and The Cancer Care Centre.

As a qualified counselor, she continues to support others and facilitates a Young Women’s Cancer Support Group. To further increase her knowledge

She travelled to India on a pilgrimage, gaining valuable insight and experience.

Her personal meditation and teaching practices in compassionate care are much in demand, including Learn to Meditate courses for beginners and weekly sessions for those with some experience, based in Piccadilly, McLaren Vale and Goodwood.

“I am now 13 years in remission from the cancer, but above that and best of all, I have found peace in my life,” she said.

“For me, the outcome of living or dying is not the issue and the important goal is to live without the effects of stress. “At this time in my life, I am doing what I really love as nothing makes me happier than helping others.

“I know how important it is to have people who care around when dealing with a life-threatening situation.

“My sister Bronny and my workmate Margie Budich at my workplace Rip It Up publishing gave me the support that I needed when I was diagnosed with cancer.

“Good support is very important to all people in crisis and I feel privileged to be able to give that support to others. “I am a ‘middle way’ person, not extreme in any form.

“I listen to my body, eat healthy food and even though my life is still a busy one, I manage because I am content within.”

In 2012/13 Ms Wallace developed and co-ordinated the SA Patient Village Paver Appeal for the Leukaemia Foundation and is currently a tour guide for the South Australian Health and Medical Research Institute in Adelaide.

At the institute, she manages and conducts group tours and engages with the public to ensure information about the research of the organisation is presented in an informative manner.

“It’s such an exciting field,” she said. “I find it stimulating to work there.”

In her spare time, she enjoys spending time with Ruby, family and friends. “Life has to be balanced,” she said.

“There is no need to be insular or always resting to be peaceful – that comes from within.
“Daily meditation and prayers keep me grounded so I can live life to the fullest.

“I still have a busy career and love being with people, but at the end of the day I can go home to my partner Tim and all our animals on our beautiful, rural and restful property at Forest Range and feel calm.

“Our home is on 9ha with horses, cattle, dogs, cats and many native animal visitors as well as a forest nearby that we walk through regularly to find peace at the end of a busy day. “It is only 25 minutes to the bottom of the hill and after leaving the rush of the city, all our cares and worries are left behind.

“My work is in the middle of the city, on the Fleurieu and in the Adelaide Hills and my home is ‘very country’ and wonderfully secluded.

“You can’t get much more balanced than that.” 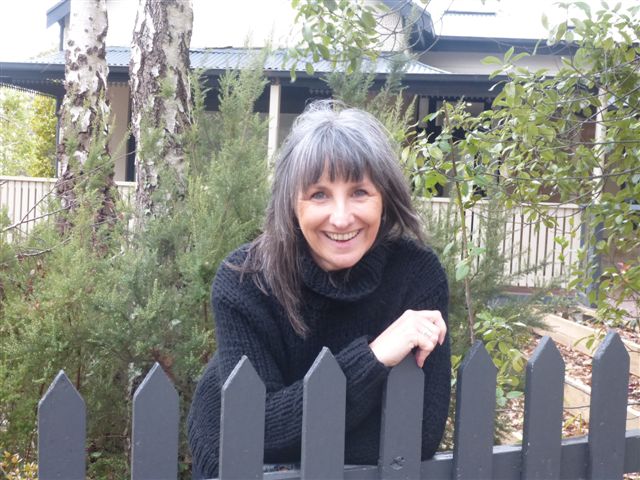 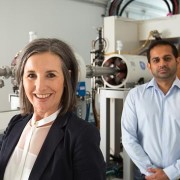 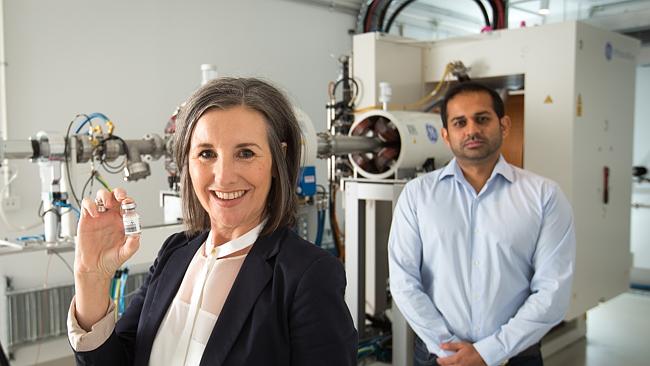 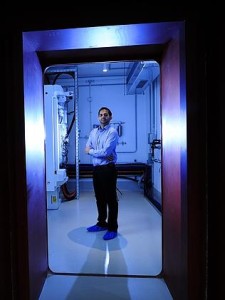 THE cyclotron — it sounds like the name of a character from fictional sci-fi action series Transformers.

But this $4 million machine, hidden behind 2.5m thick walls and buried 20m underground to guard against errant radiation, is set to transform lives.

The particle accelerator at the South Australian Health and Medical Research Institute has just come on line, belting out radiation which, when creating critical isotopes for cancer research, would rip through a mammal’s body.

In the past month, 23 people have been injected with the radioactive tracers which glow and show exactly where the cancer is.

It is ideal for personalised care — telling oncologists whether they should cut, treat with chemotherapy or use the blunt force of radiotherapy. And then it shows just how the radiotherapy is working.

People who stand to benefit from the investment include India Wallace, 54, from Forest Range.

Diagnosed with breast cancer more than a decade ago, she has relied on isotopes flown from Melbourne to track her disease. But with a short shelf life, even a slight delay rendered them worthless.

“If a plane was delayed there was a real problem — and when you are dealing with cancer you want answers now, not tomorrow,” she said.

“My daughter Ruby is now approaching 25. For a young woman like her, having this machine in South Australia should she ever need it — and we obviously hope she won’t — is a huge bonus.

“When you have cancer you don’t want to wait for answers, you need it fast.”

Cyclotron wizard Prab Takhar is the man conjuring up the golden potions that can help cure cancer and reckons it can also help the crippled to walk and may fix dementia.

“We are looking at neurology, stem cell research, the potential to make paralysed people walk, dealing with Alzherimer’s — and we are just starting,’ Mr Takhar said.

As director of the Molecular Imaging and Therapy Research Unit within SAHMRI, he oversees the machine in a fortified bunker about the size of a big office.

Its ability to create radioisotopes gives doctors clear evidence of where cancer is spreading, but in doing so it creates radiation requiring the strictest safeguards in SA.

“This allows for quick personalised treatment for cancer — to show if there is cancer and where it is,” Mr Takhar said.

“It helps doctors decide whether to go for surgery, chemo or radiotherapy.”

With SA’s first cyclotron, Mr Takhar and his team can create radioactive glucose sugars that are injected into patients.

The injected sugars glow when they hit cancer cells as a patient undergoes a PET scan either at the Royal Adelaide Hospital or a private scan at Tennyson. 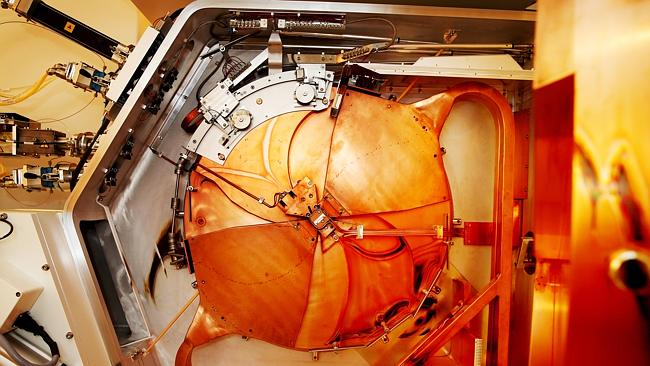 The rarely-seen inside chamber of the cyclotron. Picture: Mike Burton Source: News Limited

“Right now, we have the ability to provide this radioactive compound for each of the 100 patients scanned weekly in the state’s two PET scanners,” Mr Takhar said.

“Additionally, we now have the ability in the state to increase this number to allow all oncology referrals to be met almost immediately.

“The cancers currently being PET scanned with this molecular imaging probe include lung, brain, oesophageal, colorectal carcinoma and some lymphomas.

“The ability to develop new compounds with the cyclotron will enable us to provide probes for other conditions, such as heart disease and debilitating neurological diseases.

“We have had some amazing philanthropic donors but that is what we are now relying on as we hope to use this wonderful machine for its full potential.”

Patients dealing with cancer may be referred for treatment with the cyclotron technology under Medicare.

Originally published as Inside our cancer-busting bunker.